Is Mouthwash a Substitute for Brushing & Flossing? 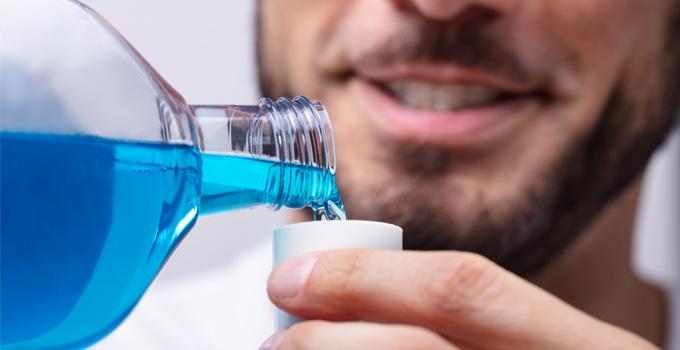 Swishing a minty mouthwash may be refreshing, make your mouth feel cleaner, and remove lingering odours from your breath. But is mouthwash a substitute for brushing and flossing? Or are there downsides that outweigh these advantages?

Many people in the UK use mouthwash on a regular basis.

Those using a mouthwash twice daily had an approximately 50% increased risk of developing pre-diabetes/diabetes. This common oral hygiene behaviour is actually putting you at risk of harm!

How could that even be possible?

One of the biggest dangers of using mouthwash regularly is that it can make you feel like your mouth is clean when it isn’t. We all know from experience that if you rinse your car with a strong hose spray, it won’t be effective at removing all of the dirt and grime that is attached – A truly clean and healthy mouth requires regular brushing and flossing, just like your car requires thorough scrubbing to get clean!

If you’re using mouthwash as a substitute for good oral hygiene, you’re putting yourself at serious risk for gingivitis, cavities and other dental issues.

For a few hundred years, between the 1600’s and the early 1900’s, there wasn’t a lot of progress in the development of commercial mouthwashes. A variety of folk remedies and homemade solutions were used, but a market for mouthwash didn’t really exist.

So how did we get to where we are today, with entire shelves of mouthwash for sale at the drug store?

It’s actually an example of a company creating the market for their products– think DeBeers inventing the tradition of diamond engagement rings.

Listerine was created in the 1870’s and was originally used as an antiseptic to reduce infections after surgery. It was also sold as a floor cleaner!

It wasn’t until the 1920’s that sales took off. A series of adds promoted Listerine as a cure for chronic halitosis (bad breath). Before the ad campaign, nobody really worried about how their breath smelled. But something about the adds resonated with people and Listerine’s sales increased by nearly 8000% (not a typo!) in under 10 years.

That brings us up to today, where drugstore shelves are packed with an incredible variety of mouthwashes, each with a different gimmick and advertised purpose.

Your mouth is teeming with bacteria. It’s true. And it’s a good thing. There are more bacteria in your mouth than there are people on Earth. And a huge number of them actually benefit you by protecting against the more dangerous bacteria.

When you use an antibacterial mouthwash, it kills all kinds of bacteria, even the good ones! This can be the opportunity that the hazardous bacteria need, to take over and start an infection. This is known as a “rebound effect.”

Another side effect of bacteria loss, is reduced production of nitrites (which help your blood vessels to expand and contract efficiently). A Swedish study linked lower nitrite production from antibacterial mouthwash to an increased risk of cardiovascular disease.

You should know that there are mouth rinses that may be prescribed by a dentist if you have periodontal surgery. You should follow your dentist’s instructions if you’re prescribed one of these mouthwashes.

However, in my professional opinion, regular brushing and flossing, using proper techniques will keep your mouth clean and give you Dental Health for Life.